After eliminating wheat and sugar from my diet, I thought that I would be restricted to a diet without baked goods. But one day I found myself wondering what our ancestors did in the days before they had access to refined grains and sweeteners. I figured that they made do with what they had on hand. My native American great-great-great grandmothers knew used ground corn and molasses; my Scots-Irish grannies used oats and barley and honey…so why shouldn’t I experiment with the things I had on hand that I knew would work with my gluten-less, sugar-less metabolism. The result was an oat-based pastry that bakes up nicely with a crisp, flakey texture. It’s vegetarian, too, and can be made vegan by substituting shortening for the butter and using alternative leavening for the egg. ~ Glyn 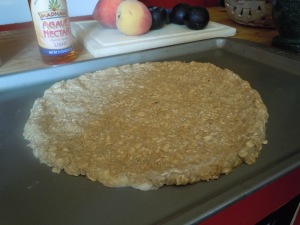 Working from the center outward, place the blueberries in the middle of the pastry. Surround with the sliced peaches, reserving 7 slices. Place the plum halves equally spaced around the outer edge with a slice of peach in between each plum half.

Drizzle the agave nectar over the top and sprinkle with cinnamon and cardamom. Bake at 325 for 45 minutes, or until the crust is brown and the fruit is bubbly. Cool slightly. Use two spatulas to transfer the tarte to a serving plate. Serve warm or cold. Nice with whipped cream.