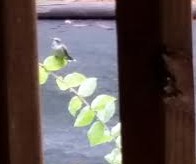 Back in May we noticed that a hummingbird visited our front garden several times each day. In order to make it welcome we put out a feeder. And it hopes of attracting more hummingbirds, we added additional feeders to the yard. What we did not realize was that the one bird would consider himself lord and master of the entire yard and would spend all his time guarding all the feeders. Naive as we are, we thought that the abundance of food might make him a bit more tolerant of other birds. We were wrong. Later, he did mate, and albeit grudgingly, permits her to feed as well.

Lately, another pair of hummingbirds have been showing up — no doubt because it is nearly time for their annual migration south and they are bulking up for the journey. But because of the aggressively territorial nature of the first set of birds, I doubt that any of them are benefiting from the calories they snatch between bouts of aerial warfare. More than enough food for dozens of hummingbirds with four birds fighting over it all!

Which perturbs me no end as it reminds me of how similar we human creatures are. There is more than enough food on this planet to feed us all. There is more than enough intelligence, resources and technology to end poverty. Literacy and education are no longer optional, they are necessary to the success in life. But what do we do? We continue to embrace the false and self-destructive notion that there is not enough to go around. We hoard, and in doing so, create even more fear and conflict. We squander our own energy in trying to prevent others from accessing what they require in order to become part of a productive whole.

If we don’t wake up soon, this “zero-sum game” mentality will be the death of us. And if the human race were to have a collective obituary, it might read, “cause of death: stupidity.”

Here’s a thought for the day: Even if for no reason other than enlightened self-interest, let’s all share something. Just give it a try.